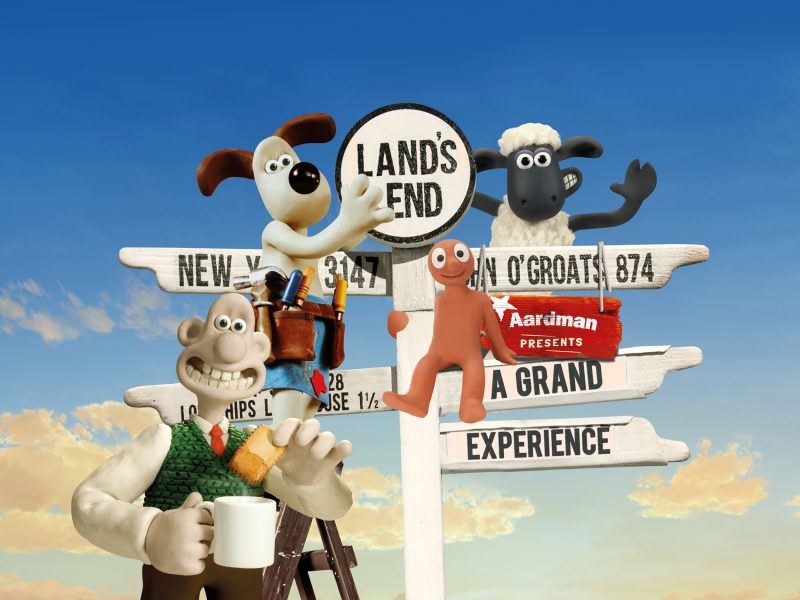 A new interactive family attraction has been unveiled in Cornwall, starring much-loved characters Wallace & Gromit and others from Oscar-winning animation studio Aardman.

The ‘Aardman Presents: A Grand Experience’, attraction is based at Land’s End and replaces the landmark destination’s successful Shaun the Sheep Experience.

Iconic Aardman characters Wallace & Gromit and Morph join Shaun’s farmyard friends within the attraction, which offers an entertaining experience for all ages, themed around some of the studio’s biggest TV and film successes.

Improving and expanding upon the Shaun the Sheep Experience, the new site gives visitors the chance to step into Wallace & Gromit’s living room, explore Wallace’s workshop and help build one of his Cracking Contraptions, before climbing on board a rocket to the moon.

Aardman Presents: A Grand Experience is part of a £200,000 investment in Land’s End this winter which will also see a new 4D film arrive at the venue’s 100-seat cinema, titled ‘Return To The Lost World’.

“After a winter of redevelopment at Land’s End, I’m thrilled to be able to announce the opening of a new and expanded Aardman attraction.

“It’s great to be able to bring world-famous characters like Wallace & Gromit to Land’s End, along with old-favourites like Morph who will be as familiar to mums and dads as he is to younger children.

“Visitors will be able to enjoy a series of interactive games and experiences while exploring the venue, including drawing boards where guests can design their own inventions and video walls where they can take a selfie and then watch as their faces are ‘Morphed’.

“We’re also bringing a new movie to our 4D cinema for 2018 with ‘Return To The Lost World’, a sequel to our popular feature ‘The Lost World’ promising bigger and more exciting adventures on an island filled with dinosaurs.”

Aardman Presents: A Grand Experience is open on the following weekends: 24th-25th February, 3rd-4th March, 10th-11th March, 17th-18th March before opening for the summer season from Saturday 24th March through until the end of October Half Term.

Find out more at www.landsend-landmark.co.uk where you can book attractions tickets and save 10%. Also visit Facebook: facebook.com/landsendlandmark or Twitter: @VisitLandsEnd.