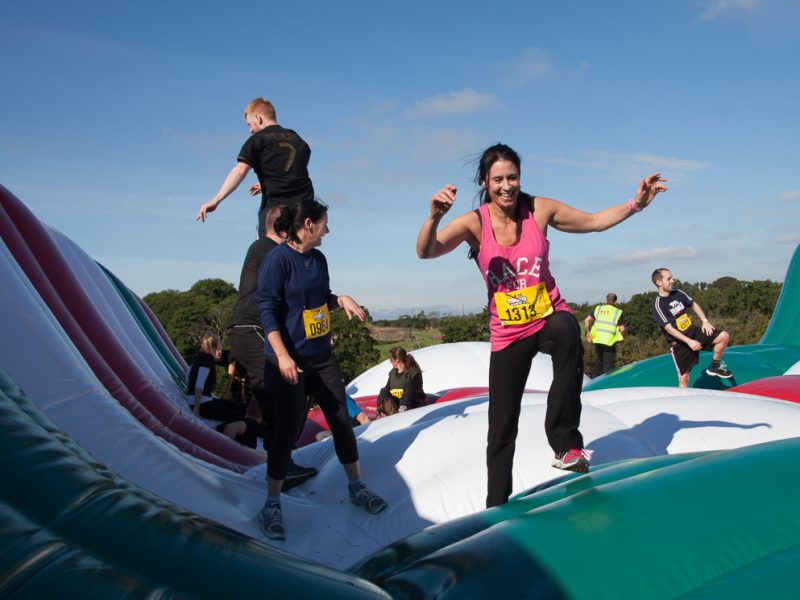 This summer Boxed Off went all Gung-Ho!, providing publicity for an enjoyable 5k event that has been taking its inflatable obstacle course across the UK.

Thousands of fun runners have taken part in Gung-Ho! events in Liverpool, Newcastle and Windsor, helping raise money for charity along the way.

Boxed Off secured television, radio, press and internet coverage for the three events, along with a successful media launch in Liverpool.

It takes a team of twenty people a whole day to assemble the course of ten challenges including a gigantic ball pool, massive foam pit and mammoth climbing wall. The event culminates with the challenge of ‘Thriller‘, Europe’s largest inflatable slide, standing at 48ft tall.

Cbeebies presenter Alex Winters is the brains behind Gung-Ho!. He said: “I wanted to take part in a venture that would put a smile on people’s faces. I had the idea of creating an event that would capture the fun and pure joy of living that we see in toddlers and young children but for a slightly older audience.

“People have seen Wipeout, It’s A Knockout and some of the other obstacle races on TV – well this captures the essence of that.”

This year’s three Gung-Ho! events have now concluded with thousands of happy runners from right across the UK laughing their way across the finish line.

They’ve been so successful that organisers have already announced Gung-Ho! will be returning to Windsor and Newcastle in 2016, with the promise of further events around the country still to come.

To help publicise the events, Boxed Off used its extensive list of contacts from across the UK to gain coverage in the form of press releases, features and interviews across a wide range of media.

If you’re planning an event that needs significant media coverage or would simply like to take your business profile to the next level, get in touch with Boxed Off Communications. Call 0151 304 7017, email: hello@boxedoffcomms.co.uk or follow this link.